Home / Roller Shutters / How do you secure a bunker?

How do you secure a bunker?

HAG were recently tasked with the unusual job of helping secure a converted World War II bunker. The bunker, which was left derelict after being used as a decoy during the Second World War, has been restored and will be used as a holiday home once finished.

History of the bunker

The bunker was built in 1941 and was used to generate the electricity for a decoy lighting display on the Pen-y-Lan ridge. The lighting display was created to help divert German bombing missions to try and prevent the bombing of a Royal Ordinance factory at Glascoed. The lighting, which replicated the lighting and fire effects of the Glascoed site, was a success and the display was bombed during a raid. 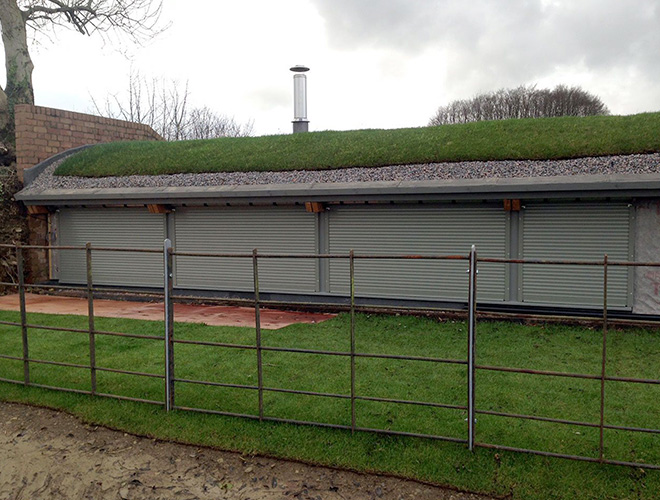 After the war the building was neglected and ran into ruins, with the roof collapsing. In 2012, plans to renovate the bunker were approved and work began to transform it into a holiday cottage as the area is popular with walkers.

As the bunker was in such poor condition, with the ruins consisting only of exterior and interior walls, it required a considerable amount of renovation work. Despite renovation, the bunker still resembles the appearance of the original bunker design, with the roof being covered in turf.

In order to keep the bunker safe when not in use, HAG were enlisted to install Armourguard C1 roller shutters. The roller shutters are manufactured from galvanised steel and provide a high level of security to the bunker. They have been coated in a powder coating with a natural, subtle shade to blend in with the surrounding environment. When not deployed, the shutters store inconspicuously in an overhead box.

HAG are manufacturers and installers of industrial doors and roller shutters. For further information about the products we sell and install, or our maintenance services, please get in touch with a member of our team by calling 0800 072 3444.